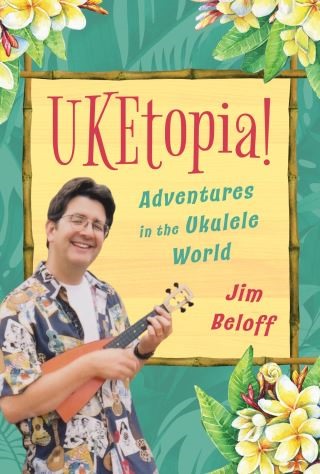 Adventures in the Ukulele World

When Billboard Associate Publisher, Jim Beloff purchased his first ukulele at the Rose Bowl Flea Market in 1992, there were no ukulele songbook collections on the market—none—just a few vintage instructional books. As an already-accomplished guitarist, this frustrated Jim, who had fallen in love instantly with this little instrument. Sensing that there might be an opportunity to fill this void, he and his graphic-artist wife, Liz, created Flea Market Music, Inc., which, for thirty years, has published more than three dozen song and instructional books, totaling over one million copies in print. They have also grown the ukulele market through their influential fleamarketmusic.com website, the creation of the popular UKEtopia concert series, marketing and promoting their family's line of ukuleles, consulting on two major museum shows, and a continuous performing schedule.

At the same time, Jim (aka Jumpin' Jim) wrote the first complete full-color history book on the ukulele, recorded and produced nearly a dozen CDs, made three instructional DVDs, composed two ukulele concertos for symphony orchestra, penned numerous articles for ukulele and trade magazines, and continues to lead workshops at uke festivals throughout the world.

Today, Jim and Liz are recognized as having played a major role in the current third wave of ukulele popularity. They've also accumulated a lot of wonderful stories and photographs in their almost three decades of ukulele adventures that are included in UKEtopia! Jim also recounts some stories of memorable experiences trading licks and working with celebrities such as George Harrison, Bette Midler, William H. Macy, Eddie Vedder and, yes, Tiny Tim.

Jim Beloff is the author of The Ukulele: A Visual History (Backbeat Books), producer of Legends of Ukulele, a CD compilation for Rhino Records and has made three how-to-play DVDs for Homespun. He is also an active songwriter. His 2014 two-CD set, Dreams I Left in Pockets, features thirty-three songs he wrote or co-wrote with uke legends Herb "Ohta-san" Ohta and Lyle Ritz.