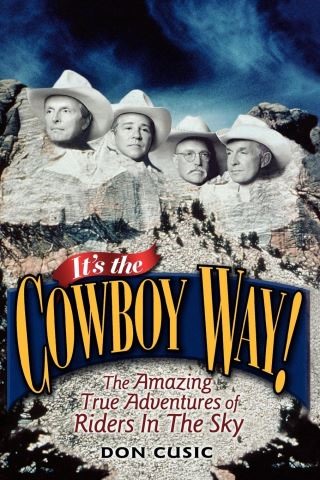 It's the Cowboy Way!

The Amazing True Adventures of Riders In The Sky

It's the Cowboy Way! tells the full story of the amazing true adventures of group members Ranger Doug, Woody Paul, Too Slim, and Joey "The CowPolka King" for the first time, from their first gigs at "Herr Harry's Phranks 'N' Steins," in Nashville, to their rise to the top of the Grammy heap. Since 1977, Riders In The Sky has faithfully tended a musical tradition kindled by singing cowboy legends, such as Gene Autry and the Sons Of The Pioneers. Throughout its long career, the group has branded the genre with its own mark, crafting a well-balanced mix of both classic and original western songs—smooth harmony, hot licks, and comedy. Over the past quarter of a century, and more than 4,500 shows, 290 national TV appearances, 203 public radio shows, nearly 700 Grand Ole Opry appearances, 2.3 million miles on the road, two Grammy Awards, three television series, and 31 albums down the trail, a group that began with a commitment to carry on an American musical tradition has itself become a national treasure.